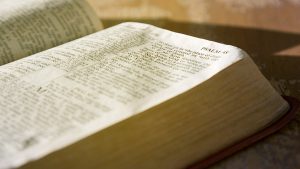 A disabled man from East Texas woke up early one morning last week to find his tiny house on fire. “I looked up and my whole bedroom was on fire,” said Charles House, the homeowner. “All I could do was just jump up and run out the house.”

Although his property was a total loss, one thing remained intact: his Bible. “He said His word would not perish, and the Bible did not burn. It was scorched but it did not burn. That Man’s word is real.”

House’s tiny home was a storage building that he transformed into a house. He was saving money for a larger home.

The Tyler Fire Marshall’s Office reported that the fire was caused by “hazardous wiring,” which caused circuits to overload, reported KLTV. The fire started in the walls and spread to the ceiling. House is thankful to have escaped. “I liked to have passed out trying to get out the door, and it’s fortunate I got myself out of there. It’s a blessing; I can’t stop saying that because it’s a blessing. Thank God.”

As House walked through his burned property, the Bible sat on top of a burned side table. “You can take it away, but you can never stop His word,” he said. “I’m a witness to that right now. Seeing that Bible, in the middle of that fire … it didn’t burn that Bible.”

Man’s Tiny House Destroyed by Fire; His Bible Intact Among the Ashes

Ever Consider Living in a Tent? – Tiny House Blog