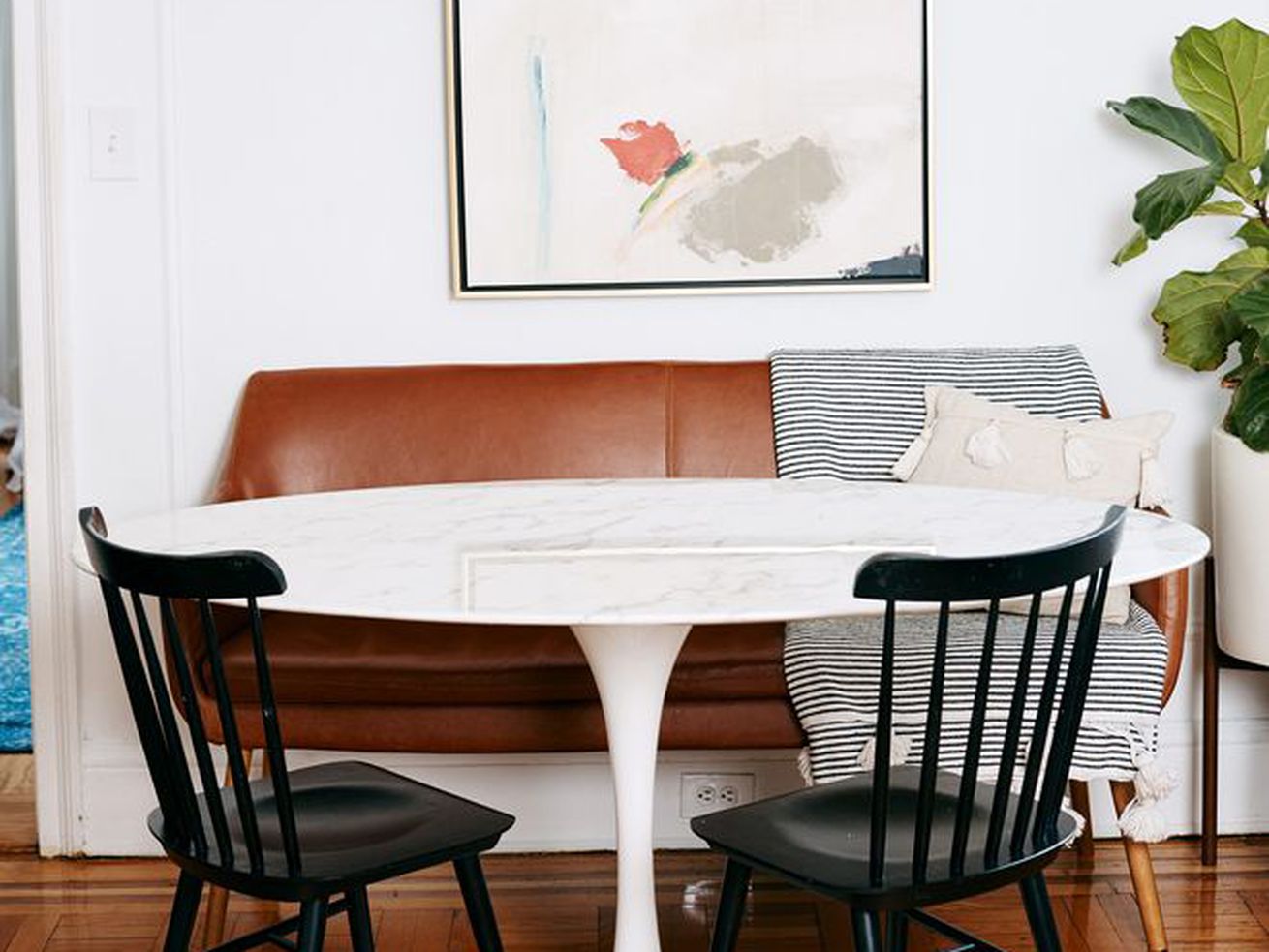 I have been living in (relatively) small spaces since I moved to New York City 22 years ago, so I’ve learned firsthand how to make the most use of limited square feet. As a journalist whose career has focused on home design and décor, I’ve also had the luxury of snooping around other people’s homes to find out what works for them. Last year, while writing my first book, The Little Book of Living Small(which came out in April), I got to see how all kinds of people were living in their own small spaces. While those homes had custom solutions and DIY fixes, they were also filled with a lot of affordable, off-the-shelf products their owners bought to maximize their spaces. Below, I’ve listed the best 12 of those products, some of which serve very specific functions, while others are more versatile. All, however, work hard to make a tiny feel (and sometimes even look) much grander than it is.

Cheap stacking stools that could pass for Aalto’s

The Stool 60 by Alvar Aalto is a classic design that can be a stool, a side table, a bedside perch, or a plant stand. Fortuitously, if you don’t have the budget for the real deal, there are dupes on the market. A telling detail of the dupes is their four-legged construction — the original Stool 60 is three-legged — but if you’re really committed to the original’s look, I’ve met people who have removed the fourth leg and rejiggered the other three with the help of a power drill. Piled on top of one another, they take up the floor space of a single seat — and you can still rest a drink or a plant on top! This set of four from Home Depot is a great deal at just $16 per stool, but if you only need one or two, Bed Bath & Beyond sells them for $22 apiece.

For years, I used clear plastic shower liners as my “shower curtain” because they made my small bathrooms look bigger (I liked to think of them as a poor man’s glass shower door). But while space-opening, those always looked like cheap shower liners. So I was delighted when my friends Michael and Lisa Fine at Quiet Town started making these “sun shower” curtains, which are a fancy version of my budget solution with a little pop of color at the base. West Elm has them in a few more fun colors if you don’t like the yellow. And if you do go the inexpensive-liner route, be sure to get one labeled “crystal” clear — not a frosted liner, which will look cheap.

A (Noguchi-esque) paper seat that folds to flat

This genius sculptural stool is actually made of paper, and the material makes it reminiscent of a sculptural Noguchi lamp. The stool has a felt seat, collapses down to flat, and weighs next to nothing. I first saw a stool like this in decorator Sally Breer’s apartment, when it was featured in T magazine.

A tulip table to squeeze in extra seats

While nobody will be squeezing in guests anytime soon, the time to gather around a table will come again. Whether you’re dining with one, two, or more, a tulip table like the Odyssey from CB2 (a riff on Eero Saarenin’s iconic mid-century table for Knoll) is an ideal small-space table because it takes up less floor space than a rectangular counterpart while offering just as much seating. Plus, its single pedestal makes it super-easy to add extra chairs when needed (no legs to get in the way). Tellingly, six out of the 12 homes featured in The Little Book of Living Small had some variation on a tulip table.

While stools like the Aalto lookalikes and the folding-paper model are great for guests, you want something sturdier with a back for your daily meals (especially if it’s a chair that does double duty in your work-from-home setup). Seats with a petite footprint can often feel really flimsy to sit upon, a fact I became acutely aware of when I was pregnant. Not so with these hardwood, spindle-style Salt Chairs manufactured by Ton Design Team for Design Within Reach, which are similar to some vintage chairs I have in my own home. DWR has been selling them for more than a decade; while not exactly cheap, at a retailer where other dining chairs can go for $1,000 or more apiece, they are kind of a bargain, especially considering the European-made quality.

A coffee table that’s barely there

See-through furniture made of glass, Lucite, or acrylic keeps things looking light and airy. While glass is less likely to show scratches than the plastics, it also poses the highest risk of chipping and is much heavier to move. Lucite is the highest-quality version of acrylic but will be priced accordingly, which is why acrylic can be a better bet if you’re shopping on a budget. No matter the material, a transparent, waterfall-style coffee table like this acrylic one goes a long way in opening up a cramped living room (just know you’ll need to keep its surface tidy to maximize its space-opening potential). Another bonus of clear furniture: It (literally) blends in with most any style of decor.

A triangular desk to make any corner an office

For anyone (everyone?) trying to shoehorn a work-from-home situation into an already-full home, a corner desk will work wonders. It makes an often underutilized part of any room instantly super-functional, and because of the triangular shape, you still have plenty of leg space. I have a vintage version in my living room that looks kind of like this unfinished one from Home Depot, which even has some storage in the form of a drawer. If you’d prefer something stained, this midcentury-inspired model has a more finished look (and is $11 cheaper).

A bedside drawer (hold the table)

I’ve often seen shelves mounted next to beds in teeny spaces, but I personally need a bit more space than a ledge to stash my stuff. That’s why I bought a pair of minimalist floating nightstands on Etsy (the seller, right now, is only taking requests for custom orders). This simple style, from Crate & Barrel, is spiritually similar and has a drawer for keeping anything you don’t want out on display. Another virtue of a floating nightstand: If you, like me, have drawers under your bed, wall-mounted furniture will never get in the way when you need to open them.

A (mini) crib on wheels

There’s a reason mini-cribs are the choice of small-space power bloggers like Erin Boyle of Reading My Tea Leaves and Alison Mazurek of 600sqft: They have wheels and fold up so you can have a mobile or tuck-away “nursery.” I’ve used and recommend the Babyletto Origami mini-crib, which is bigger than some mini-cribs on the market; it feels plenty sturdy even though it folds.That said, experience taught me that it’s a good idea to buy Babyletto’s mini-crib mattress, too, because the one included with the crib is pretty skimpy (and finding another mini mattress that fits is a lot harder than you’d think).

These wall-mounted ledges from Ikea are a cheap and practical way to store books, magazines, or toys for kids or pets. We’ve got three installed in my son’s room to hold his various books, and with a little styling, their colorful covers look like wall art. If you’re hanging them in a home with kids, a word of warning: Mount the shelving high enough that your little one can’t try to climb it like a ladder!

A portable (and powerful) reading light

Clip-on lamps like this are a dime a dozen at hardware stores: They’re dirt cheap and you can attach them (almost) anywhere you need a little extra illumination. We have one that I spray-painted red and clipped to a book ledge, but they can also latch onto bookcases or directly on a bed frame.

A slim step stool that holds a ton

Okay, technically this collapsible step stool can only support up to 300 pounds — but that’s still a lot of weight for something that can fold flat and be tucked away in such narrow nooks as the gap between a fridge and a wall. In your average city apartment, the Rhino can help you reach most things, making it great for maximizing vertical space. It comes in lots of fun colors, too; Amazon has it in green, white, and black in addition to the red shown, and Buy Buy Baby has it in pastel pinks and blues as well as a pleasing light gray (while it’s two bucks more at Amazon, it qualifies for either free or Prime shipping; at Buy Buy Baby, the price of the stool alone doesn’t qualify for free shipping).

Conversations: Patricia Foreman, “A Tiny Home to Call Your Own” | Kansas Public Radio

The Art of Minimalism in Mobile App UI Design